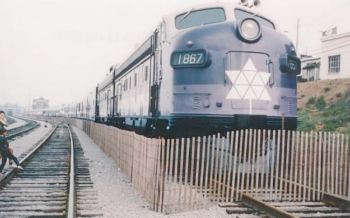 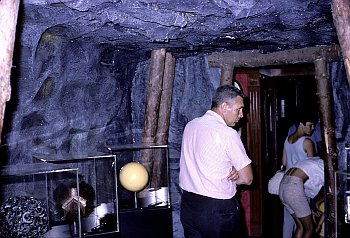 The Confederation Train is seen at the Niagara Falls, ON CNR Station in July, 1967.

A unique thing about the train is that the whistle played the first four notes of O'Canada which just happened to be two longs a short and a long and thought to be compliant with Rule 14L.

Unfortunately, always the spoiler, Government bureaucracy got in the way of this and on 30 December 1966 (virtually the eve of its departure) the Board of Transport Commissioners (before Transport Canada) stepped and forbid the use of this form of whistling at crossings. A second set of conventional horns had to be quickly installed to meet the 14L requirement. This specially made whistle was used only while the train was stationary and on display.

Credit to Doug Wilson for his efforts in researching and composing the above information.26th to 28th of July 1967 - Don Coppola - Niagara Railway Museum CollectionInterior photograph of the Mining Exhibit on the Confederation Train.

The Confederation Train was sponsored by the federal government for Canada's Centennial Year. Both CN and CP contributed equipment to the train including a locomotive each. The train consisted of 13 cars of which 6 were exhibit cars which told the history of Canada from early exploration to the present.

It was officially launched by the Governor General's wife in Ottawa 1 January 1967. It then made a non-stop cross country trek to Victoria, BC (including ferrying the whole train to the island) It opened to public viewing for the first time in Victoria on 9 January 1967 beginning another cross Canada trip in an eastward direction which involved calling at 60 communities across the country from Victoria to Halifax.

Doug Wilson adds "Because of the narrow aisles and the crowds touring the train it was difficult to get interior photos. It was a little wider in the mining exhibit and I was able to get a shot".

Credit to Doug Wilson for his efforts in researching and composing the above information.1967 - Doug N. Wilson