The electric operation known as the Great Gorge Route was actually started in 1891 as the Niagara Falls Park & River Railway, running from Suspension Bridge to Table Rock. In later years, after the American operation, known as the Great Gorge Route started, the name was changed to the Niagara Belt Line, as well as the International Railway Company. The Canadian operation ran along the top of the gorge from Falls View to Queenston, and the new Queenston-Lewiston Suspension Bridge. On the American side, the route ran through the gorge at river level, under the GTR & MCRR bridges, and then began to gradually rise up the gorge wall to Niagara Falls, New York. It followed the top of the gorge to the Falls View Bridge (Honeymoon Bridge) and then crossed back to the Canadian Side. The gorge route was very difficult to construct, and to maintain, with rock falls and accidents. On September 11th 1932, the Canadian operations ceased, and, after a tremendous rock fall at the Whirlpool rapids, the American operation was suspended in 1935.

The NFRM has in it's collection a large number of Great Gorge Route items, among these brochures and postcards. Below is a number of links to pages (currently there is only one) that will showcase some of these items.

Tickets and Tokens from the Great Gorge Route 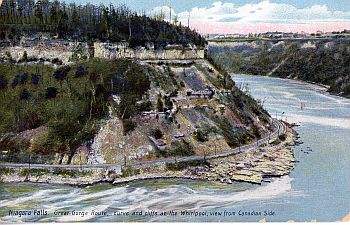 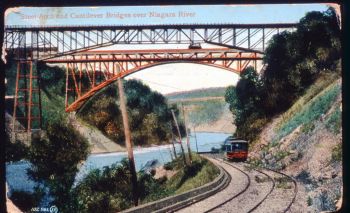 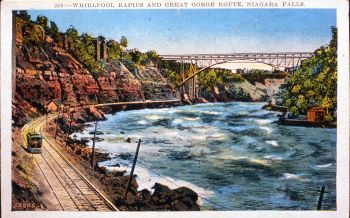 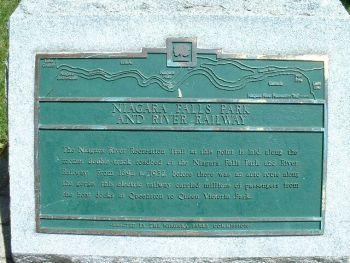 A Great Gorge Route car is downbound passing the Whirlpool Rapids in this postcard view. The background shows the Whirlpool and Cantilever Bridge, while the boardwalk on the Canadian side is visible at right.c-1910 - Niagara Railway Museum Inc. CollectionOne of the plaques along the Niagara Parkway, this one deals with the Niagara Falls Park & River Railway, which ran from Queenston docks to Chippawa, and was actually the start of what became the Great Gorge Route.
The plaque reads as follows: "The Niagara River Recreation Trail at this point is laid along the former double-track roadbed of the Niagara Falls Park & River Railway. From 1892 to 1932, before there was an auto route along the gorge, this electric railway carried millions of passengers from the boat docks at Queenston to Queen Victoria Park."Ken Jones Jr.